Read Mr Tansley’s opinion piece, as President of the Australasian College of Cosmetic Surgery, published in the Herald Sun on Wednesday 23 December 2020, outlining the need for competence-based accreditation in cosmetic surgery. 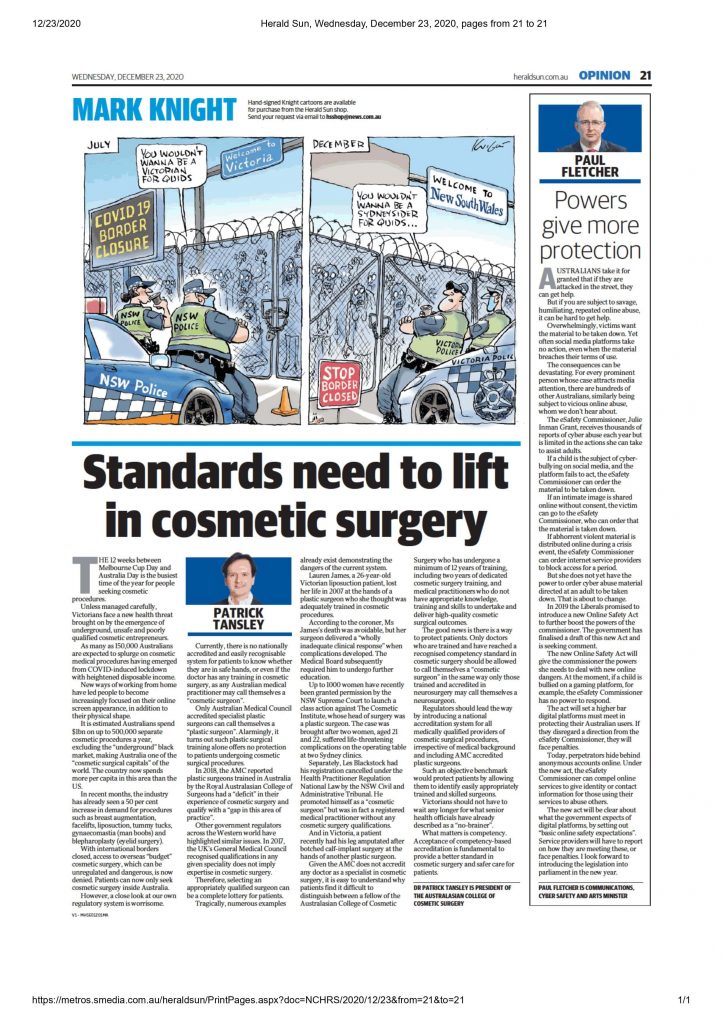 Read Mr Tansley’s opinion piece, as President of the Australasian College of Cosmetic Surgery, published in The Daily Telegraph on Tuesday 24 November 2020, outlining the need for competence-based accreditation in cosmetic surgery. 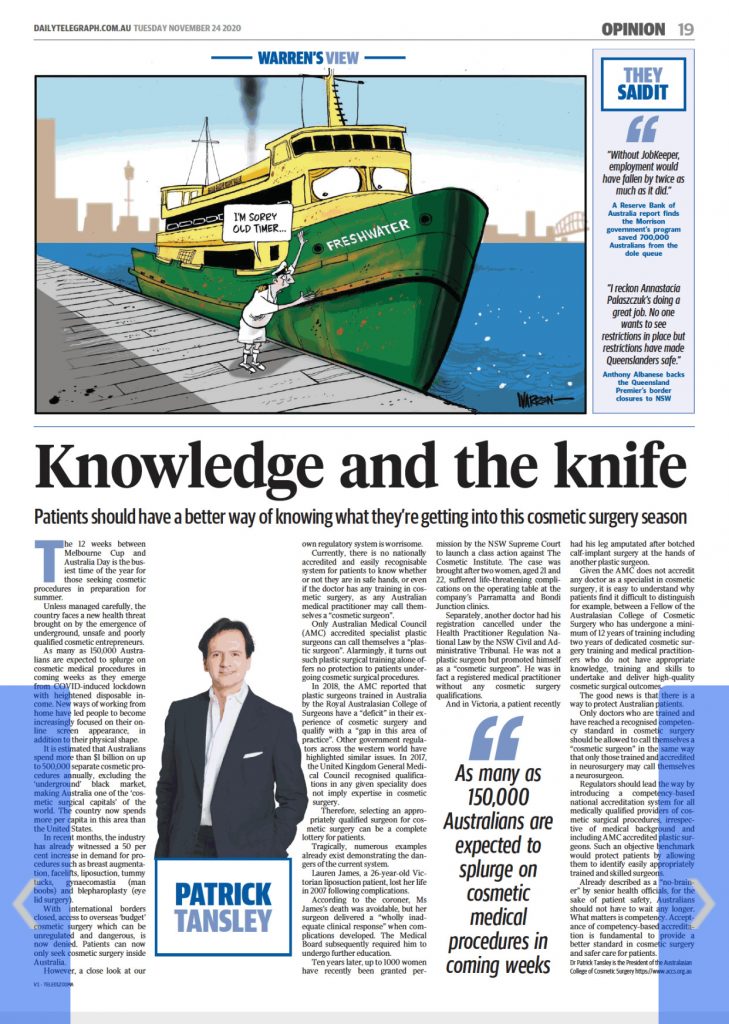 2017 marks the 10-year anniversary of Mr Patrick Tansley MD FRCS (Plast) having been awarded a prestigious Hunterian Professorship of the Royal College of Surgeons of England. It was awarded in recognition of his clinical scientific research under the tutelage of Professor Sir Magdi Yacoub OM FRS, world renowned cardiothoracic surgeon.

These rare awards are conferred for contemporary achievements in honour of John Hunter, recognised as the founder of modern scientific surgery. Hunter, born almost three centuries ago in Scotland, had a colourful story which he commenced by dropping out of school aged 13 and continued thereafter being of fiercely independent mind. He was a fascinating man who, whilst having a reputation as being intolerant of fools, was kind and self-sacrificing. He worked at St George’s Hospital, London, published nothing until he was 43, but became Surgeon General by 61. His key contribution was to seek the experimental basis for surgical practice, shifting focus from ‘thinking’ alone to ‘careful observation and scientific method’. This is the origin of modern scientific surgery & is what made Hunter great. To this day our reliance upon accurate scientific observation rather than theory alone stems from Hunter’s development of this mode of scientific enquiry.

Mr Tansley gave his Hunterian oration, in his thirties, in 2009 and through providence, whilst also working also as a young surgeon at St George’s Hospital, London. His ongoing love of writing, teaching and learning reflects Hunter, who once said - ‘What induced me to lecture was the great advantage everyone finds by putting his thoughts into writing. A man can never tell how much he knows until he arranges his knowledge; only then can he tell how defective it is.’

To Mr Tansley’s knowledge, only one other plastic surgeon in Australia (now retired) has ever been awarded a Hunterian Professorship of the Royal College of Surgeons of England. British plastic surgeon Mr Tansley practices aesthetic surgery in Melbourne and Brisbane and is a Fellow, Councillor and current Censor in Chief of the Australasian College of Cosmetic Surgery. Read more about him at https://www.plasticsurgeryhub.com.au/dr-patrick-tansley-london-melbourne-brisbane/

Mr Tansley's background, training and experience has recently been published on the Plastic Surgery Hub.

Dr Patrick Tansley – from London to Melbourne and Brisbane

END_OF_DOCUMENT_TOKEN_TO_BE_REPLACED

I brought a libel action in the Supreme Court of Victoria at Melbourne against 15 plastic surgeons of the Royal Melbourne Hospital. All 15 are Fellows of the Royal Australasian College of Surgeons, including the Head of Unit Professor Mark Ashton FRACS. The libel action followed their publication of a letter dated 22 May 2013 authored on Royal Melbourne Hospital letterhead and sent to Mr Peter Dohrmann FRACS, Clinical Director International Medical Graduate Assessments at the Royal Australasian College of Surgeons (RACS).

END_OF_DOCUMENT_TOKEN_TO_BE_REPLACED

Techniques and approaches ranging from fundamentals to cutting edge science were examined, to ensure new Fellows of the College had met the standard of cosmetic surgery expected by the Australian healthcare consumer.

The Australasian College of Cosmetic Surgery is the only institution in Australia to offer a formal training program in Cosmetic Surgery. Fellowship candidates are required to meet the American standard of Board Certification. Mr Tansley is both a Fellow and Councillor. He has been elected to the Board of Censors and is the Censor-in-Chief elect for 2016.

For a consultation with Mr Tansley in Melbourne telephone NorthEast Plastic Surgery on 03 9088 5000 or you can click the button below to book a consultation online:

For a consultation in Brisbane telephone Fleming Tansley Cosmetic Surgery on 07 3252 8929.